Marietta High School senior Fatima Badillo was offered a full-ride scholarship from the Air Force Reserved Officer Training Corps. In the AFJROTC program, Fatima serves as the group commander, the highest position in the program for students. She has been a part of the program since her freshman year and has earned multiple awards and honors. She is a Distinguished Cadet and has reached the level of Colonel, the highest rank given to a cadet. As group commander, Fatima oversees all cadets and events in the program and manages several teams and clubs. Fatima was nominated for this scholarship by her teacher Lieutenant Colonel James Wilson and was one of only 200 other students in the nation to receive the scholarship offer.

Since joining the department her freshman year, Fatima has accomplished an immense amount. She completed over 245 community service hours and raised over $43,000 for local charities throughout her four years. Fatima received over 11 awards including Military Order of the Purple Heart Award and the Air Commando Association Award. She has a 3.7 GPA and is a partial International Baccalaureate Diploma student, participating in the IB Film Honors program, Beta Club, and the AFJROTC Kitty Hawk Air Honor Society. 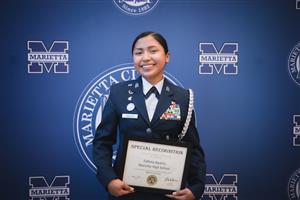 QuestBridge Scholars are awarded a full, four-year scholarship that covers the entire cost of attendance. The purpose of this program is to provide low-income students with the opportunity to be successful at a college or university. To become a QuestBridge scholar, students must first submit an application which will match the student with universities and colleges that fit the profile of the college. If they are chosen as a finalist, they must submit additional match requirements to their chosen school. 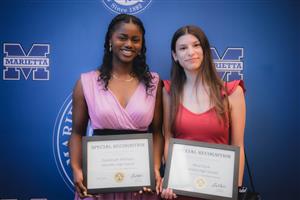